What is the best way to travel around in South America? 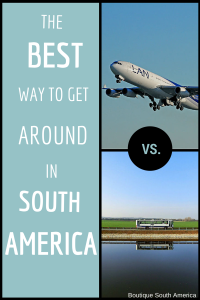 Nearly twice the size of Europe in terms of land mass, and with such diverse geography with the incredible Andes mountain range that stretches through seven countries all the way from Venezuela down to the most southern depths of Patagonia and the vast Amazon river its adjacent rainforest takes up more than 40% of the continent.So how does one travel around South America and its various cities and attractions in the most efficient way.

If you consider this from a comfort and time saving perspective, you can’t go past flying between cities as the best way to make the most of an extended trip through South America.

Can you train travel around South America?

Cross country train services like those found in Europe are simply not an option as the terrain doesn’t allow for it. And although the bus network is extensive, operates between countries, has semi and fully recliner options and is regularly used by locals because of its affordability, when you weigh up the cost with the hours spent and potentially the recovery time, there is just no comparison.

Past clients have chosen the bus option for a new experience, only to change their return leg to a flight after their initial 14 hour bus journey from Santiago to Calama.

The reality is that if you’ve spent more than 10 hours flying to reach South America, spending most of your day on a bus to get from one place to another is just not appealing.

That’s not to say that there are not some worthy bus routes that will allow you to see some of the landscape as you are travelling. The bus trip from Santiago to Mendoza is an exception, offering a ride and views through the Andes and the fertile wine region for approximately 6- 8 hour journey (there can be delays at the border.) People can choose to fly this leg as well, with a direct flight that only takes 55 minutes.

An important question to keep asking yourself as you are planning a trip to South America is how long will it take?

Personally, most road trips longer than 8 or 9 hours are not worth the energy that they take out of me unless there is absolutely no other way, which can sometimes be the case in remote regions like Patagonia.

But if there is a choice, the option of flying as the main means of travel around South America will win every time, even if this means going through several airports as part of the one trip.

Crossing from one end of the continent to the other is a huge task (whether this be from east to west or north to south) and sometimes this is best broken up with a stay at an airport hotels in between rather than stressing to meet three connections in the one day as this can be risky.

And it is also handy to remember that whilst the airline network is thorough, not all flights to every destination operate daily so it is worth checking as part of the planning process.

How long does it take to plan your South America trip like a pro?